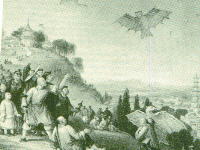 In the history of flight, the first lighter-than-air balloon (1783) and the first powered aircraft (1903) are very recent when compared with the age of kites.The exact date and origin of the kite is not known but it is believed that they were flown in China more than two thousand years ago. One legend suggests that when a Chinese farmer tied a string to his hat to keep it from blowing away in a strong wind, the first kite was born.

The earliest written account of kite flying was about 200 B.C. when the Chinese General Han Hsin of the Han Dynasty flew a kite over the walls of a city he was attacking to measure how far his army would have to tunnel to reach past the defenses. Knowing this distance his troops reached the inside of the city, surprised their enemy, and were victorious. Kite flying was eventually spread by traders from China to Korea, and across Asia to India. Each area developed a distinctive style of kite and cultural purpose for flying them.During the Silla Dynasty of Korea around the year 600, General Gim Yu-sin was ordered to subdue a revolt. However, his troops refused to fight. They had seen a large shooting star fall from the sky and believed it to be a bad omen. To regain control, the General used a large kite to carry a fire ball into the sky. The soldiers, seeing the star return to heaven, rallied and defeated the rebels.Kites were brought to Japan about the 7th century by Buddhist monks. They were used to avert evil spirits and to insure rich harvests. 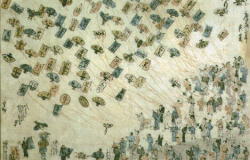 According to one story, about 300 years ago a thief was said to use a large kite to carry himself to the top of Nagoya Castle in order to steal a golden statue from the roof. All he was able to remove were a few small pieces. Later he was captured and punished severely when he bragged of his exploits.Kite flying became very popular in Japan during the Edo period. For the first time Japanese people below the samurai class were allowed to fly kites. The Edo (now Tokyo) government tried unsuccessfully to discourage this pastime as “too many people became unmindful of their work.”

The earliest evidence of Indian kite flying comes from miniature paintings from the Mogul Period around 1500. A favorite theme was of a young man skillfully using his kite to drop messages to a lover who was being held in strict seclusion from him and the rest of the world. 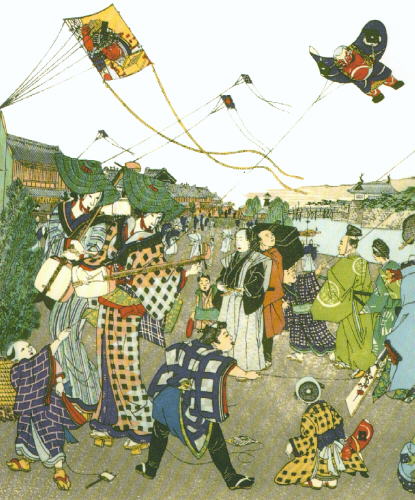 There are many stories about how the people of Micronesia used leaf kites to carry bait far out over the water where the gar-fish fed. The Polynesians have myths about two brother gods introducing kites to man when they had a kite duel. The winning brother flew his kite the highest. There are still contests in the islands where the highest flying kite is dedicated to the gods.

Marco Polo carried stories of kites to Europe around the end of the 13th century. Illustrations of the period show non-flying dragon kites on military banners. Sailors also brought kites back from Japan and Malaysia in the 16th and 17th centuries. Kites were regarded as curiosities at first and had little impact on European culture.

In the 18th and 19th centuries, kites were used as vehicles and tools for scientific research.

Men like Benjamin Franklin and Alexander Wilson used their knowledge of kite flying to learn more about the wind and weather. Sir George Cayley, Samuel Langley, Lawrence Hargrave, Alexander Graham Bell, and the Wright Brothers all experimented with kites and contributed to development of the airplane.

The US Weather service flew kites designed by William Eddy and Lawrence Hargraves to raise meteorological instruments and cameras.

One of the strangest uses of kite power was developed by schoolmaster George Pocock. In 1822, he used a pair of kites to pull a carriage at speeds of up to 20 miles per hour. Some of his kite trips were recorded at over 100 miles. And because road taxes at the time were based on the number of horses a carriage used, he was exempted from any tolls! 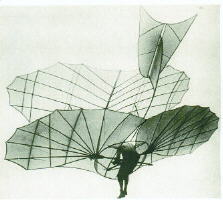 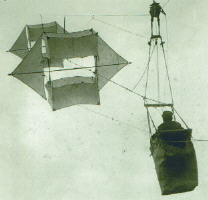 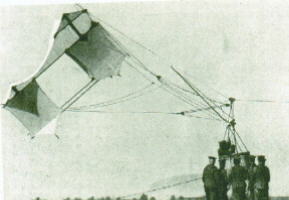 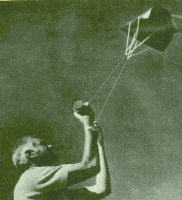 During World War I, the British, French, Italian, and Russian armies all used kites for enemy observation and signaling. The introduction of airplanes quickly made these units obsolete. The German Navy continued to use man-lifting box kites to increase the viewing range of surface-cruising submarines.  In World War II, the US Navy found several uses for kites. Harry Saul’s Barrage Kite prevented airplanes from flying too low over targets. Pilots lost at sea raised the Gibson-Girl Box kite so they could be found. And Paul Garber’s Target Kite, a large steerable Diamond was used for target practice and aircraft recognition at sea.

In 1972 Peter Powell introduced a toy dual line stunter and the public began to fly kites not only for fun, but also for sport. Enthusiasts experimented with new designs that could fly precise maneuvers, go faster, or perform intricate tricks.

Larger and more powerful kites were designed and in the 1980’s, Peter Lynn of New Zealand introduced a stainless steel kite powered buggy. In the 1990’s, kite traction on wheels, over water, and on ice have become increasingly popular. In 1999, a team used kite power to pull sleds to the North Pole.
Material courtesy of the American Kitefliers Association
Material courtesy of the American Kitefliers Association . For a copy of the teaching manual “Kites in Classroom”, contact the AKA Online Store